After several years of talking about changing the name of the church, the 2020 Church Council, under the leadership of Rusty Shelton, determined 2020 would be the year. At a retreat in January, the Council discussed the impact of the name on our ability to grow, inspire members to talk about their church and, most importantly, serve our community. It was agreed that the name was not helping us in those areas and a change needed to be made.

The decision was made to recommend to the church a name change from Highland Park Baptist Church to The Church at Highland Park.

This recommendation was made not because we wanted to move away from our history, but instead to honor it by continuing the legacy of inclusion and impact from so many who worked to build Highland Park.

The church spent several Sundays looking at the reason we were Baptist. The church determined that although we were formed and rooted in traditional Baptist distinctives — priesthood of the believer, separation of church and state, freedom to interpret scripture, and autonomy of the local church — and we still stand on those distinctives, the term Baptist has very different meanings in the current world and we don’t fit with those beliefs.

At a called church conference on March 1st, 2020 the church voted unanimously to change our name and become The Church at Highland Park.

Click to read announcement letter from Council Chair and Pastor

Click to listen to Pastor’s sermon on name change:

Photos Over the Years 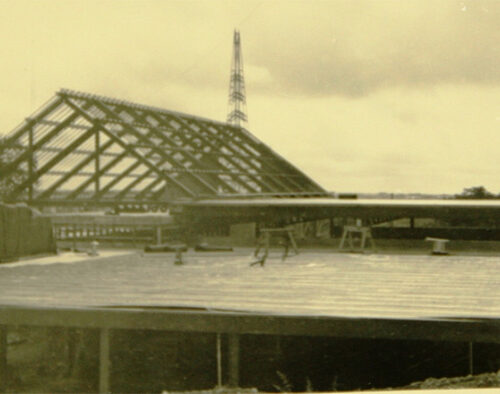 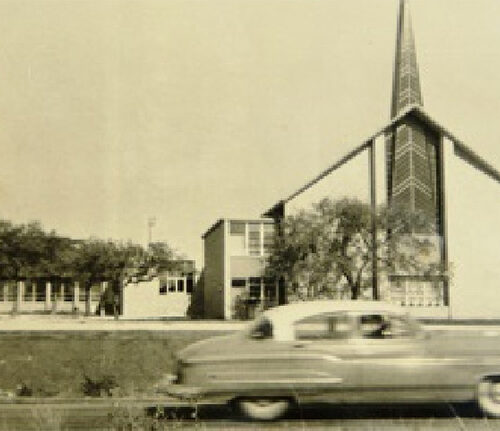 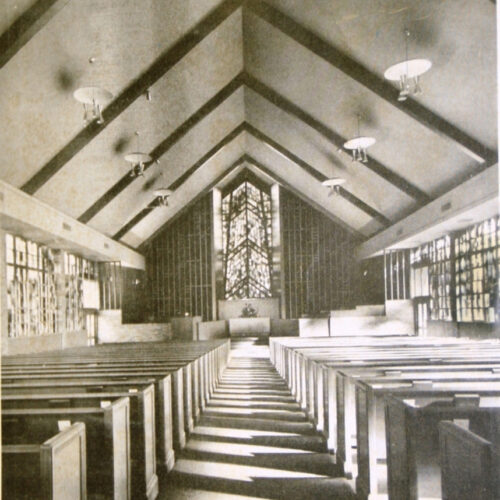 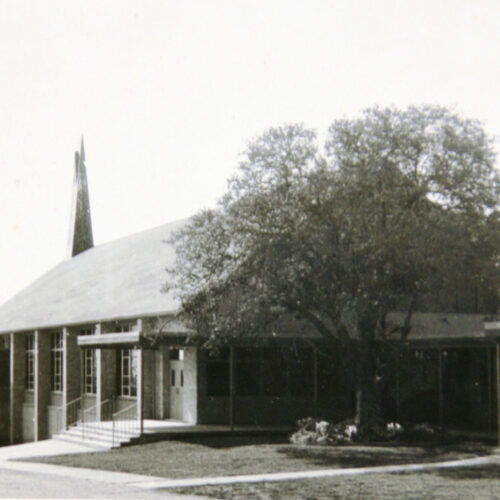 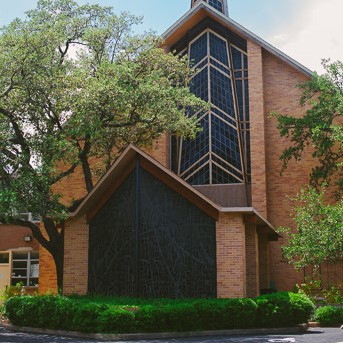 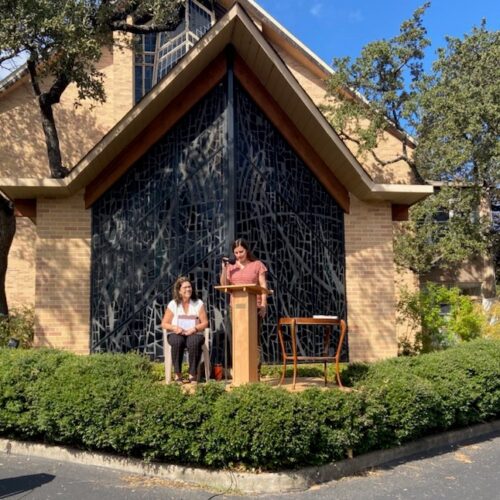 In the beginning… From the Evans History Room:

This historical account of the beginnings of Highland Park Baptist Church details milestones in the 1950’s, including descriptions of meeting in the Camp Mabry Armory and Highland Park Elementary School.

Edgar H. Perry conceived of Highland Park West neighborhood shortly after World War II, his friends telling him “Edgar, are you crazy; no one will ever move out that far.” As houses started to go up, Mr. Perry realized the neighborhood lacked a church, so he offered land above the Highland Park Elementary School to Dr Carlyle Marney of First Baptist Church in Austin.
While plans were being drawn up, the new mission church met first in the Camp Mabry Amory, then in Highland Park Elementary School. Thomas Pennington, pastor of First Baptist Church of Killeen, was called to be the first pastor.

The first worship service was held on April 27, 1952 in the National Guard Armory at Camp Mabry with about a hundred people in attendance for a sermon “Upon This Rock I Will Build My Church.” The National Guard Armory proved a busy place at the height of the Korean War, and some Sunday mornings, when the Armory was in use, the church met outdoors on the adjacent rifle range (when, fortunately, it was not in use).

In 1952, the church relocated to the Highland Park Elementary School with worship services in the school cafeteria. By April 1953, the church had grown to 76 members. In 1955, Mr. Perry offered a larger tract of land on Parkcrest Drive for the church. The Riley property lay next to a bait shop and across the street from a beer joint, but proved an ideal location for a new church. Groundbreaking for the new building was celebrated on February 20, 1955, and on April 1, 1956, the first services were held in the new church sanctuary.

Sunday School classes were well attended in the mid-1950s, and the church continued to grow under the direction of pastors Rev. John Lee Smith and Rev. William Oliver and a dynamic board of deacons. 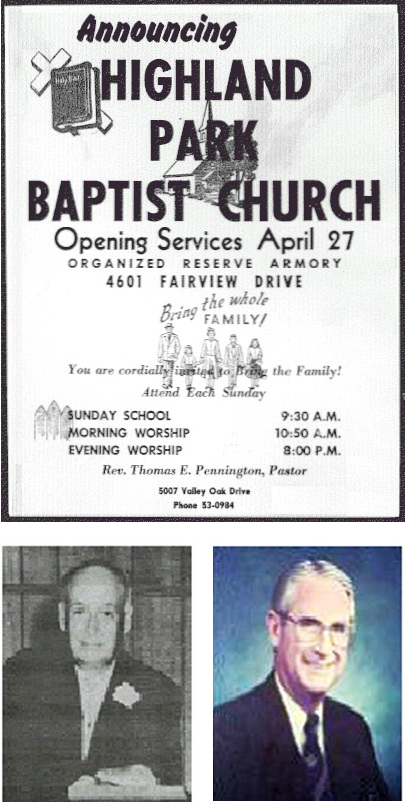 By the early 1960s, Highland Park Baptist Church had become home to 268 members, becoming the largest church in northwest Austin.

Rev. Ray Burchette ushered in a new era in 1964, leading Highland Park through 25 years of growth in spiritual and community affairs. Highland Park Baptist Church became one of the most progressive Baptist churches in Texas, championing social causes, and becoming the first Baptist Church in Texas to ordain women as deacons.

Today, Highland Park is a growing congregation. We have a place for you. Come make history with us.

The church’s Building Committee retained Mr. Henry Steinbomber of San Antonio as architect on April 28, 1953, after one year of services. He drew up plans for the new church building, starting over three times as setbacks and changes occurred. Preliminary plans were presented on February 19, 1954. One year later, on February 20 of 1955, Highland Park held groundbreaking ceremonies.

Construction of the church began that April. In the summer of 1955, the church also secured property on Madrona Drive for use as a parsonage (later sold to Rev. John Lee Smith) and petitioned the City of Austin to include the church property within city limits. Can you imagine our neighborhood ever being the “outskirts” of town?

On March 11, 1956, the church began meeting in the “social hall” (now called Sapp Hall), and the first service in the Sanctuary was held on Easter Sunday, April 1, less than four years after the very first meeting in Rev. Pennington’s house. 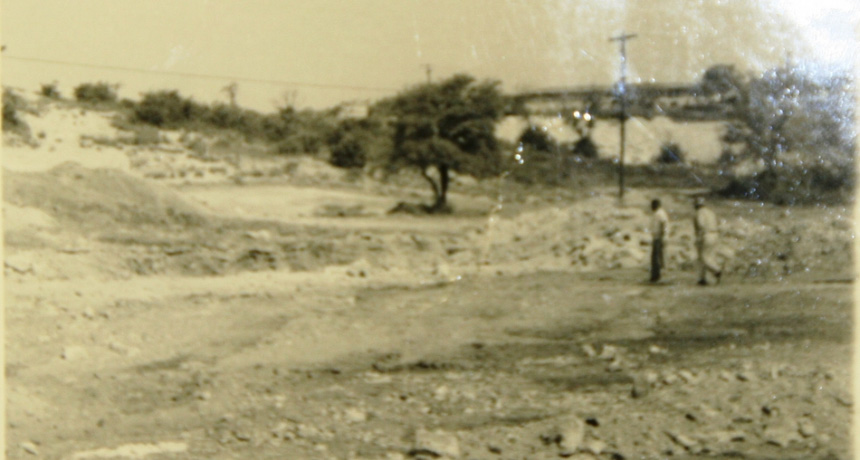 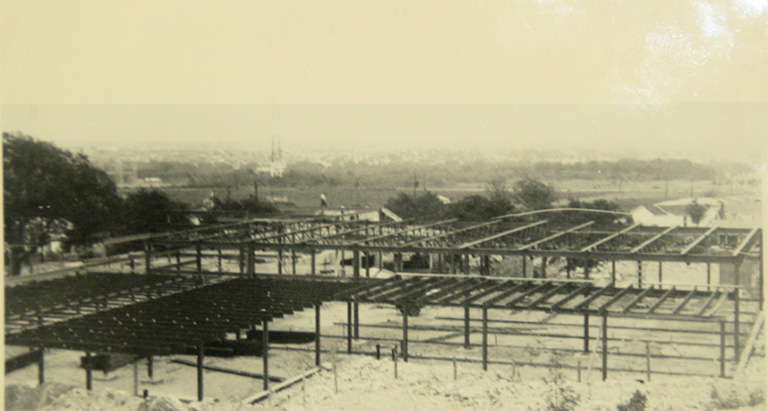 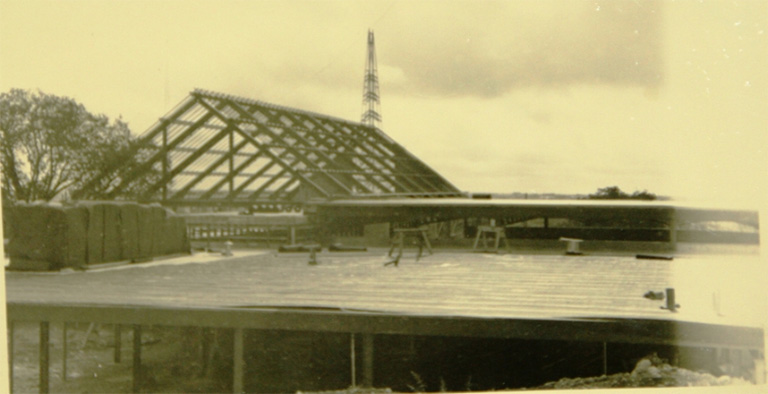 In the 1950’s, the building included the Sanctuary, Sapp Hall, and nursery suite. There was a courtyard in the rear of the church where the Atrium and children’s wings now stand. The basement remained unfinished until the fall of 1959, when an expansion of the Sunday School program necessitated more classrooms.

In April of 1961, the church officially separated itself from First Baptist Church and incorporated as an independent church, and Highland Park Baptist Church continued to grow along with the Highland Park neighborhood. Rev. Ray Burchette was called as pastor in 1964, and the current parsonage was purchased. Though no longer used as a parsonage, the 3 bedroom house is still under the church’s ownership, and has been used as Sunday School space, offices for non-profits, and rental property.

In February of 1965, the church established a Building Fund in anticipation of more growth and a need for larger facilities. An Expansion Committee was formed, who calculated that the church would need 4,200 square feet for Sunday School classes. Plans for expansion also included a Chapel, to be financed by friends of the Teague family. J.C. Evans Construction agreed to construct the Chapel at cost.

However, the expansion plans were postponed due to financing problems. To relieve some space issues for a cheaper price, the church purchased two temporary buildings to place at the back of the lot. These buildings still stand today and have been used as storage, Sunday School classrooms, and rental properties. 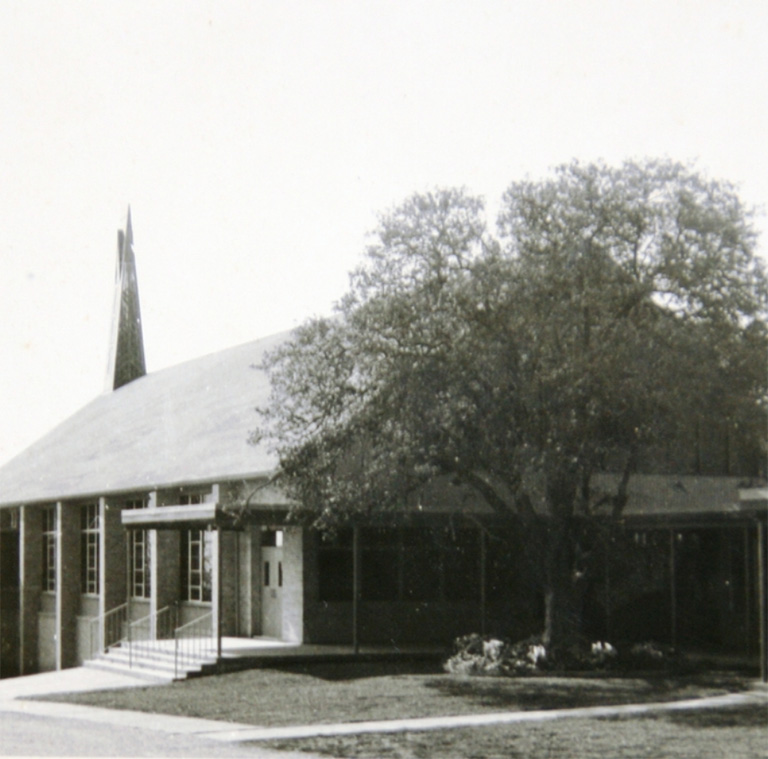 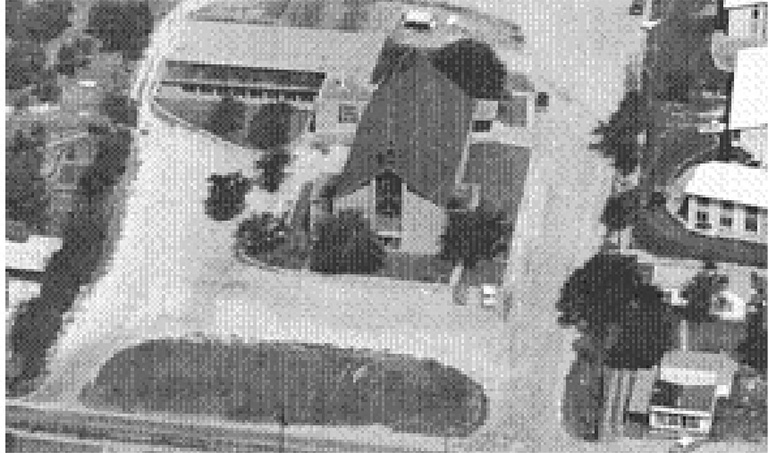 In March of 1967, the building project resumed under the direction of J.C. Evans Construction. Groundbreaking ceremonies were held April 9, 1967, and in March of 1968, the new Teague Chapel and Education Wing, including new office space, were dedicated. The Education Wing, a set of classrooms and offices along two hallways, is now occupied by Huntington-Surrey School and our children’s department.

As church needs changed, so did our spaces. In 1971, the basement was once again remodeled to house the youth Sunday School program, and in 1981, a church parlor was dedicated. In 1983, the church expanded its parking lot and erected a cross on the top of the steeple.

Building for the Future

In the late 1980’s, the church began a Long Range Planning Committee, which included a report on the building plan from Cox/Croslin and Associates in March of 1989. The Building and Grounds Committee also evaluated the accessibility of the church building, which did not include an elevator. Asbestos was discovered and removed in August of 1989, and the Sanctuary underwent some repairs. In October of 1989, the church adopted a master plan for the next five years, including work on the church buildings.

On April 24, 1991, the church officially voted to expand the facilities and the Building Committee began working with Cox/Croslin and Associates. The building plans were unveiled at Wednesday night dinner on February 19, 1992. “Building for the Future”, a capital campaign to raise money for the expansion, kicked off with an event at the Barton Creek Country Club on April 5, 1992 with a goal of $1.2 million. By April 25, nearly 80% of the amount had been pledged.

Groundbreaking ceremonies for the new expansion were held on January 10, 1993, and the contract was signed on February 13. The project included additional adult education space, new administrative offices, and renovation of the original spaces. On April 10, 1994, the church dedicated the new building.

Since our latest expansion, the church has continued to refinish areas of the church and upgrade to more energy-efficient appliances and fixtures. The area around the chapel was refurbished in 2002. In 2003, the original office near the front of the church was turned into a parlor space, dedicated to Pastor Emeritus, Rev. Ray Burchette, and the Adria Project turned the underground into an IHN-ready area, complete with shower facilities. In March of 2008, the church received a generous bequest designated to remodel the kitchen, and the newly remodeled kitchen was dedicated January 19, 2011. 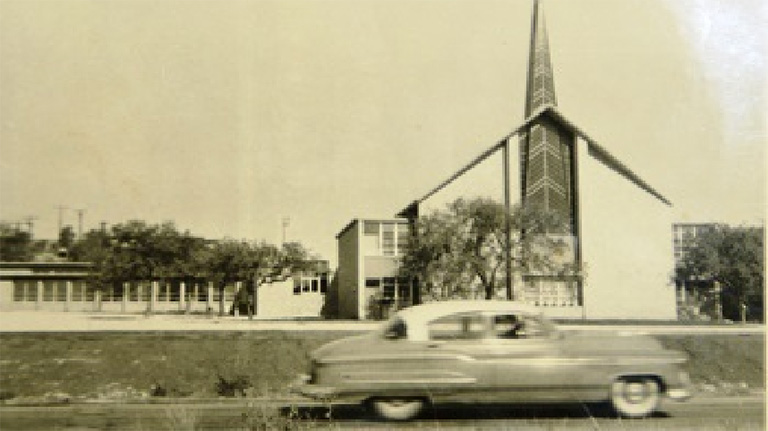 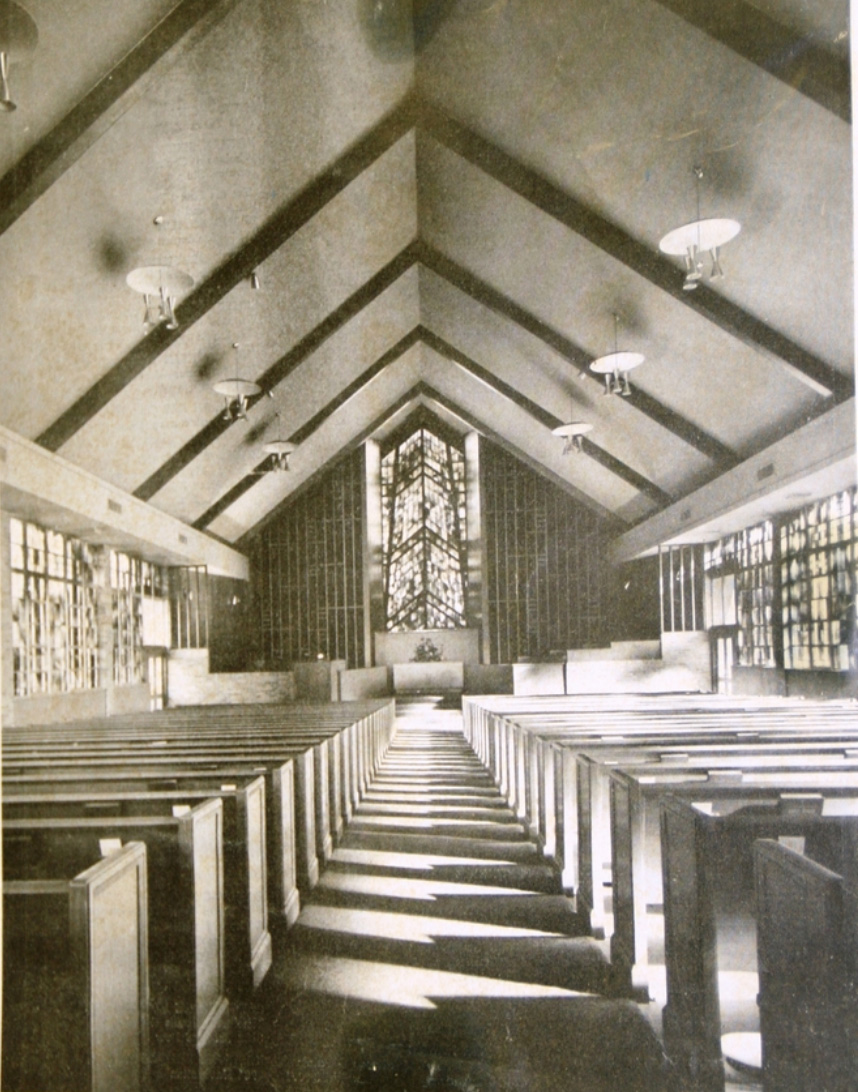 Photos from the archives of a youth camping trip to Inks Lake in June of 1987.

Photos from the archives of Mt. of Olives Baptist Church, Salvador & Bahia, Brazil in August of 1981.

Photos from the archives of Kids Camp at Inks Lake in June of 1984.

Photos from the archives of a party in December of 1982.

Photos from the archives of a junior high canoeing trip to Zilker Park on May 3, 1987.

Photos from the archives of Youth Camp in the summer of 1986.

These downloadable PDF are comprehensive histories of Highland Park Baptist Church as told by its members. Please enjoy reading.

Physical copies of the Memory Books are available at the church – feel free to take one home with you!