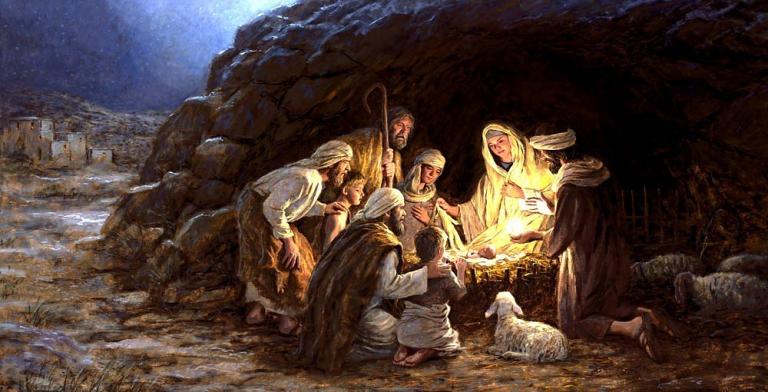 The traditional Christmas characters and stories during Advent and Christmas-time are quite familiar to most Christians, including Joseph’s dreams, the wise men from the East, Zechariah and Elizabeth, the angel Gabriel, Mary, and the shepherds.  Interestingly, these seemingly formative accounts, which appear to originate from at least two independent sources, come from only two of the four canonical Gospels, Matthew and Luke.  Further, there is no more emphasis or even mention of anything about the birth of Jesus in the entire New Testament.  Thus, only two of the twenty-seven NT books include any special mention or anything even incidental to his birth.

The probable historical order of the NT Gospels is Mark, Matthew, Luke, and John, with all of them penned over about thirty years.  Each of the four in order of writing starts at a different context in time with a continual historical rollback of sorts: (1) when John the Baptist baptizes Jesus as an adult (Mark), (2) when Mary is pregnant (Matthew), (3) before John the Baptist’s mother becomes pregnant (Luke), and (4) the beginning of time itself (John, who tells his readers in the first verse that Jesus was the “Word” and was both “with God” and “was God”).  Essentially, comparing these beginnings demonstrates a progressive deification of Jesus over time among the early churches of the first century A.D. as they reflected upon his teachings and life events, especially how he qualitatively lived.

I like the emphasis during the season on the two familiar infancy narratives for adults and especially children, including my five grandchildren.  These accounts gently, simply, and clearly teach us that Jesus was and is someone special, with the resulting imperative for us to pay attention to his life-model and teachings.  Nevertheless, my Gospel beginning preference is Mark, the earliest Gospel.

Mark starts with an adult Jesus.  Mark includes a mature and compelling summary of his teachings when Jesus says in Mark 1:15: “The time is fulfilled, and the kingdom of God is at hand; repent, and believe the gospel.”  In the immediate passage below, Jesus calls his first four apostles away from their fishing vocation with an invitation and mandate: “Follow me” (Mk. 1:16-20).  In summary, his message at his initial “coming” onto the scene as a Rabbi in time was and still is for all of us to repent.  This means fundamentally changing by developing ourselves with God’s help into new persons with fresh habits.  The transformational root is authentically following his teachings and example, which focus on loving and caring for others as well as pursuing justice for the poor, oppressed, and outcasts.

is written by various members of the church throughout the year. In these blogs, you might read about mental health, family, hope, or a variety of other topics.

It’s amazing to me that we’re here again. Another Advent season…

As a child, Christmas Eve was most definitely one of my favorite days…

As we think about how we experience this season through our…